April 12, 2016
It's so easy to whinge. To whine and complain. To give up even before most of us have even begun.
It's easy to do the same thing day in, day out. The comfort zone is called that for a reason. We have comfort in knowing what's to come. What will happen tomorrow, the day after, next week, even next month.

It's when you realise that you want more, need more, that it becomes difficult. Stepping out of a rut takes guts. It takes determination, will power and a real desire to do it.

At the moment I have a lot of friends going through really difficult times. Emotionally, physically, mentally, personally. Difficult times that could so easily tear them apart. But these women are strong, in fact I know they are much stronger than they think they are. But it will be a battle for all of them. To keep on when all they want to do is curl up in a ball and give up.

Giving up is the easy thing to do. The hard part is staying strong. 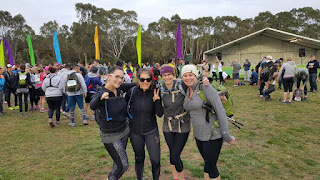 Last weekend, four wonderful young women - Lauren, Kara, Pat and Megan, did the Oxfam trailwalker.  They weren't alone. Six hundred and ninety teams participated. That is over two and a half thousand walkers. All of them walking to raise money for Oxfam, but also being part of a team endurance event.

There were rests on the way. Checkpoints where team members could do some medical work on various ouches and oohs. Where their support crew could supply food as well as much needed encouragement, hugs and, well, support. 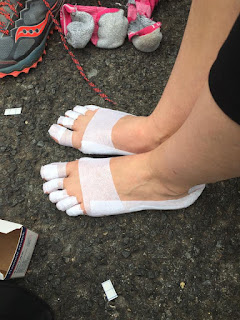 It is a hard event both physically and mentally. I mean how many conversations can you have with the same people?  I know that our group had music to bop along with but at several stages during the long long night walk there were Disney songs being sung. Loudly.

There were also tears, almost maniacal laughter. There were blisters and burst blisters and hips and thighs and knees not co-operating. There was also extreme team building, laughter (the good kind), jokes and promises of 'I'm never doing this again.' 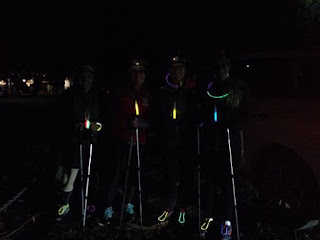 And of course not every one makes it.

Out of the six hundred and ninety teams that began only three hundred and seventy one finished with all four team members.  That is 54%.  ( I want to relate this to the statistics of those that begin a novel, out of every 100 that begin, only 3 people finish it)

I'm so proud of these four women (especially my daughter as this was her second time to do the walk). Not only did they make it, but they made each check point with a smile on their face. They finished a bit sore and sorry for themselves, but also so proud of what they had achieved. They had walked over 100 kilometres in two days. 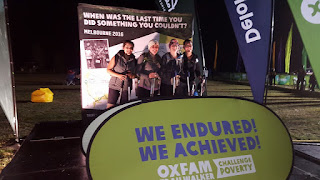 I don't really think we know what we can do until we are pushed. So many people give up too easily. Don't think they can do it, so why even try.

Or they begin and the first hint that they may have to work hard at something, then they give up. This is me when it comes to editing novels.

My friends are strong women, much stronger than they know. I believe in them all, know they will come out the other side. They will be different. They will be scarred and bruised, will have learnt so much about themselves and their abilities.

I will try and focus on this when I think I'm having a hard time. When life gives me a slap or even a push. When the editing is being put off time and time again because it's 'too hard'.

And remember how strong we all are.