January 30, 2018
I've decided (after handing in my novel MS to a cold reader) to keep busy. Well relatively busy. I could spend the time fretting over whether I've wasted a few years and thousands of words on a piece that no one likes or gets or sees any merit in it....or I could do something constructive.

So out comes the junior novel of which I have a first chapter. This novel is very different to what I normally write. The idea came during one of those sleepless 3 am journeys. And of course as we all know, everything that makes sense at 3 am is usually pure gibberish in the cold light of day.

Yet I like the notion behind the story. I have no idea where the story is going, what will happen. As we all know I'm a pantser not a planner. But I decided to have a go at brainstorming. 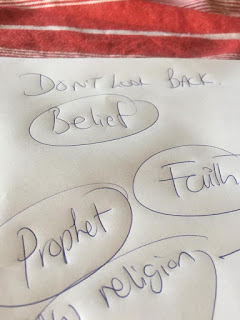 I settled down with a huge piece of paper and began to write words...phrases. Trying to put down some key ideas, concepts. Really, I was looking for anything. 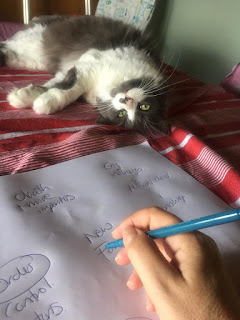 Aided by my faithful companion...well George... I began.

And really didn't get too far. This way of working is meant to encourage thinking out of the box. Is meant to inspire, to bring the subconscious forward. 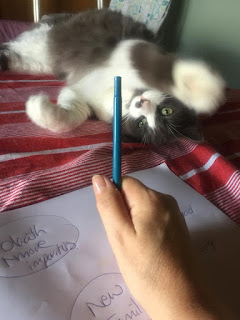 Alas, I became distracted. Somebody wanted some attention. 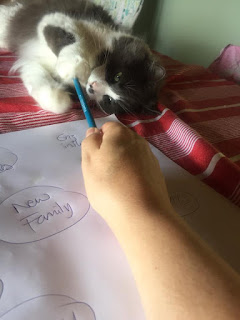 So much for stream of conscious writing.

But I kept on...regardless of my playmate my helping words-smith.

The end result...well not actually the end, as I intend to add to this as I think on what could / may / probably won't happen....but it was interesting to see what words I had put down. And what was the phrase in the centre of the paper.

It did get me thinking. In this world, that I am slowly creating..this person has to be in the centre because they have created this world. Everyone else, everything else, is because of him. 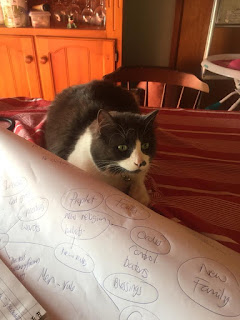 At one stage I headed off for a coffee. Needing some small distraction to ponder on what was being revealed. I suppose my subconscious knew all along that this would have to be the way...that this character, who at the moment is purely shadows and whispers, must come alive.

Although, technically, I think this is more often called mapping (or webbing due to the lines that radiate out from one word or phrase to another) this worked for me. It gave me a few new ideas, a few words that I thought were strange yet could fit into my world.

It was an interesting exercise. Especially as I really didn't (and still don't) know where I'm heading, but it's one I would do again. 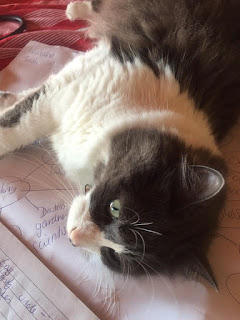 Even if my partner in crime isn't too impressed with the results.