October 30, 2012
In their flying machines. Well actually it was one daring husband and one daring not so young any more Vicki. Last weekend, we donned leather jackets, gloves, hat and goggles (combination of his birthday present and my Christmas present -  doesn't everyone give flights to each other?)  I began to channel my inner Snoopy as we soared in the wild blue yonder....in our Tiger Moths. 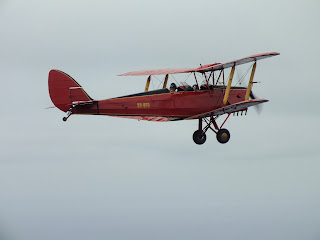 That is me in the red plane, red modes of transport, as everyone knows are faster than other colours.  So we zoomed through the skies. Actually there were several times when I wondered how on earth we were up in the air at all. It really defies belief that we put ourselves into these machines and actually leave the ground. But heh it was fun. Great fun. 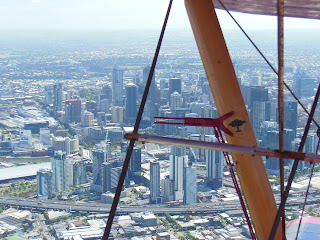 We left Point Cook and headed to the city, over Albert Park Lake and St Kilda beach just as the clouds gave way and some sun made an entrance. Melbourne really is a beautiful city.  Then we headed over water for the fun part- the acrobatics. 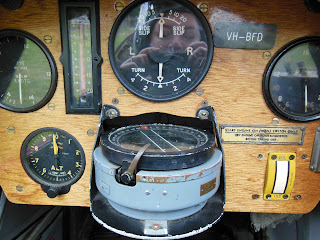 We had been flying in formation but now we separated to do our 'routines'. Routine consisted of barrel rolls followed by loop the loops- over and over again. It is amazing to see the world disappear, to feel yourself being pulled out of your seat, knowing that the belt you clicked on yourself is the only thing stopping you from falling out of the plane.

Then we did the most amazing stall and fall. Well not exactly stall- we merely slowed way way down then we headed - yep down. To see the ground coming at you, first on one side then the other. That whole feeling of being unbalanced. Not knowing which way is up, which is down.

Not only was it totally exciting, something fun and yes after the fifth loop the loop my stomach was sending me signals of 'ohhhhh' .....and I'm sure there will be some writing involved. I mean I was riding above Melbourne in a plane that was 'created' in 1941....a Grand Old Dame for sure! Have to try and capture the thrill of it all, the excitement, nervousness, the being thrown off balance and loving it - the entire atmosphere. 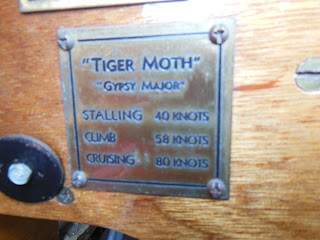 But I was sidetracked, intrigued by other thoughts and discoveries. One that drew my attention time and again was the above notice - when we did the stall and fall I watched as we slowed to 60 then 50 then 40 knots....

The other was the discovery of the fishing shacks on the beach. Did you know they were there? We went for a drive because we arrived early and there they were...this wonderful assortment of colour and style, cheek by jowl along the shore line. 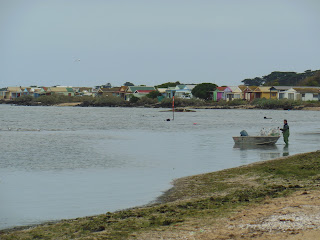 These have inspired me. A poem already forms....I will say it again but experiences, every experience, is fodder for thought and inspiration for the written form.

All it needs is us to find a way in.