MAKING THE MOST OF EXPERIENCES...

February 08, 2011
Is one of my writing goals for the year. One of only six - but a good one I thought. What does it mean? It means that when I go away, for a weekend, for a holiday, no matter where - to soak up the experiences - really see the place that I'm in- the people - the buildings, the atmosphere - to take notes for later use.

I have done this before. My first overseas trip became quite a few poems and a short story (which went on to win a prize). Our trip to the Flinders Ranges a few years ago became more poetry and another short story (yet to find a home)

I even use other people's experiences. Last year I wrote about my husband's 'boy's only adventure' to India - and sold the article :)

It's been too easy to take for granted the places I go, people I've met. This weekend we spent  two days showing a Dutch IT student as much of Tasmania as we could before he goes back home ... 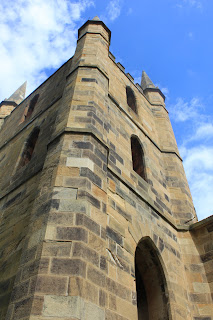 We walked Hobart's Constitution Dock and  Salamanca Place, climbed the stairs of the Shot Tower for the views, climbed down again, walked around the top of chilly Mt Wellington, spent the afternoon on Bruny Island, ate cheese from an artisan cheese maker, spent hours walking around Port Arthur, visited a Tasmanian Devil Conservation Park, ate curried scallop pies from a caravan at the Blowhole (seems the done thing), saw the Tessellated Pavement, had coffee and cake at historic Richmond, drove dirt roads in the hills, meandered back to Hobart by the Derwent river, meandered through Battery Point and then home...it was a lot in not so many hours. 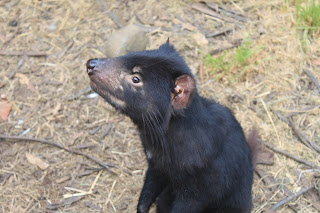 We returned early Monday morning (great for work that day- NOT) but my mind has been whirling with images and snippets of overheard conversations and  'what ifs'. Some have already been put down, fledgling poems - some ideas have been set out- some notes put away for further research (imagine a 9 yr old boy convicted for stealing toys- then you learn it was 2 boxes of toys and this was his 19th offence- imagine being sent to the other side of the world, put in a boys prison and told to reform..hmmmmmmm).

Too many times we take for granted what we do- it could be a whirlwind trip to Tasmania, a day out at the beach, a pre dawn balloon ride over the Yarra Valley, driving past a camel each day on the way to work - but these are all experiences. Experiences that should be used - for ideas, for images, for setting a whole 'what if' scenario.

For me, this is what makes me write - sharing a moment, capturing a life time, trying to connect with others something I have felt. So I'll struggle to put into words some of my thoughts - and see what happens.
experiences poetry short story Writing